Wheatgrass for the Win

Wheat, what? Yes, wheatgrass! Wheatgrass is as self-explanatory as the name makes it. It is the young grass of the common wheat plant. This grass is harvested anywhere from 7 to 11 days old. Typically, the grass is juiced into “shots” and ingested orally. Small amounts of wheatgrass juice are prepared for consumption because the body can only absorb two ounces at a time. For best results, consume the juice directly after the wheatgrass is pressed. Wheatgrass can also be found in tablet, capsule, pill, and powder form.

Side note: If you are gluten-free, you can still consume wheatgrass! The grass itself does not contain any gluten.

Wheatgrass has been noted as the most healing of all grasses. This is because the grass contains over 90 elements from the soil it is grown in. Wheatgrass is one of the richest sources of vitamin A and C found in nature. In fact, there is more vitamin C in wheatgrass than in an orange! Additionally, wheatgrass contains calcium, magnesium, selenium, potassium, B12, and zinc, among other vitamins and minerals.

In addition to the high vitamin and mineral content, wheatgrass is known for its high chlorophyll content. Studies have shown that chlorophyll may fight carcinogens in the body and reduce the risk of cancer development. Furthermore, wheatgrass is a purifier of the stomach, liver, pancreas, and circulatory system.

Still not convinced that wheatgrass is for you? Let us encourage you with some of the most powerful benefits of consuming wheatgrass:

1. Promotes oxygen levels in the body.
2. Creates an alkaline environment in the body. Acidic environments are where diseases like to form.
3. Considered a natural antibacterial agent that halts the growth of unhealthy bacteria.
4. Helps balance blood sugar by reducing insulin resistance in the body.
5. Calms inflammation and promotes healing.

We could go on. For a more extensive list of the benefits of wheatgrass, check out our friends at the Hippocrates Health Institute: 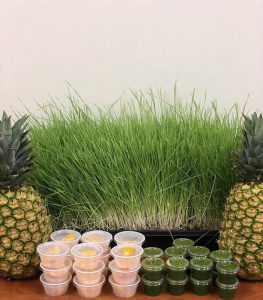